How To Extend WiFi Range

If there are spots in our home and office where WiFi connection drops, ( known as dead zones ) and you’re having trouble getting a strong WiFi signals from your wireless Router in those parts, you should use a WiFi Extender or WiFi repeater ( Generally known as WiFi Booster) to Extend your WiFi Range (WiFi Coverage ) . There are three type of devices are designed to act as a WiFi Booster. However, they each do this in completely different ways.

Stay with us to understand the difference between them and know which device you should use in which scenario.

WiFi Repeaters are first generation WiFi signal boosters to extend WiFi range. A WiFi Repeater is a device that also connects to an outlet in an area of your home, where you have a poor wireless connection or a weak signal.

A repeater does not even require much effort to connect and configure. You can simply lay them anywhere in your office or house, even without the availability of a wired port. you can Connect your repeater to a power outlet where the signal of your existing wireless network is weak. WiFi repeater is most cost-effective signal booster , but be aware that it may half the available bandwidth, thus reducing the speed of your connection.

WiFi range Extender is the second generation for WiFi boosters. With the help of a WiFi range extender, you can extend the range of your existing wireless connection and cover more area of your house. That way, it is capable of covering the dead zone areas as well.

See Also :  How to Find The Best channel For Your WiFi Router

Another difference between a WiFi Range extender and a WiFi repeater is that a repeater will repeat the same WiFi signal, while an extender will create a New WiFi network. Since this new network is created from your old one, it should have roughly the same speed and bandwidth. Also, your networks should not interfere with one another.

A WiFi Range Extender should be placed halfway between WiFi router and clients. But it should be kept in mind that the WiFi Extender is in the wireless range of the router. If you want to put your extender into a different location you must use WiFi Network Extender.

WiFi Network Extenders are the best WiFi boosters to Extend WiFi range to have a consistent, reliable high speed WiFi in every floor and corner of your home. Unlike repeaters or range extenders that re-broadcast existing WiFi signals, WiFi network Extender communicate directly with your gateway or WiFi router using Ethernet cable.

See Also:  What is WiFi Channel

A huge benefit that you can get from using an WiFi Network Extender is that it does not need an existing WiFi signal to work. Because network extender is connected to the WiFi router using wired connection. So, the bandwidth stays at its full potential. (use Fast.com Web site to Check Your Connection Speed)

As you may know, the further away a WiFi device is from the WiFi access point/router, the slower its speed. So, by using WiFi Network Extenders around your home, you can shorten the distance between your WiFi devices and the WiFi signal to increasing each device’s speed and improving performance.If you choose to go with a WiFi Network Extender, you will be provided with a much more stable wireless connection.

Any Type of Router Can be Used as Network Extender..!

In fact, the network extender is a normal router, without any special features. Only it does not have a wan port and it cannot perform the tasks of a router (such as NAT/Firewall, …). Therefore it has a cheaper price than a router. If you want to increase the coverage of a WiFi network, you can use any type of router as an extender. Technically,if you make the following settings on a router, you can use it as an extender:

See Also : When to add a second WiFi router?

Connecting the Routers in This Scenario : 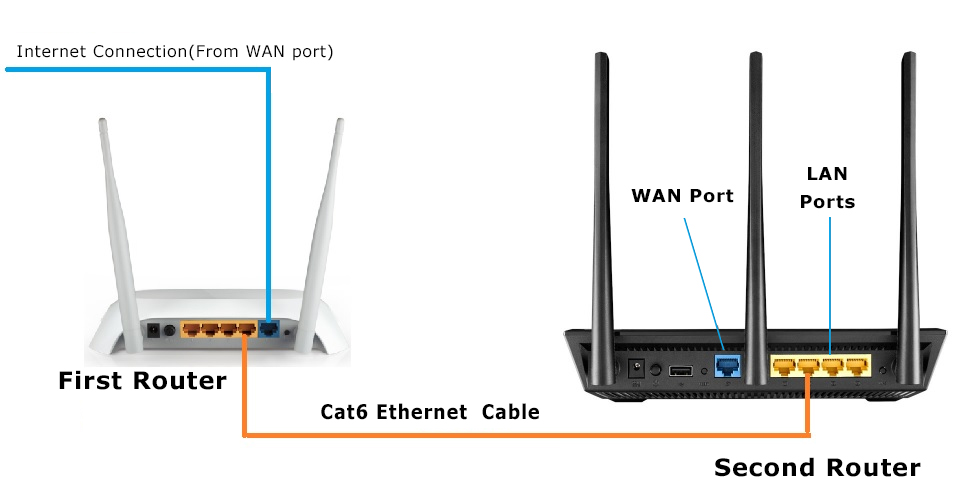 How to Change WiFi Router Login Password? Users prefer to keep router's default configurations, or only try to change the name of the network. So, they exposes themselves at many risks. Where to Place WiFi Router ? WiFi Router placement can have a significant impact on the quality and reliability of your connection. Where is the best place for your WiFi router?